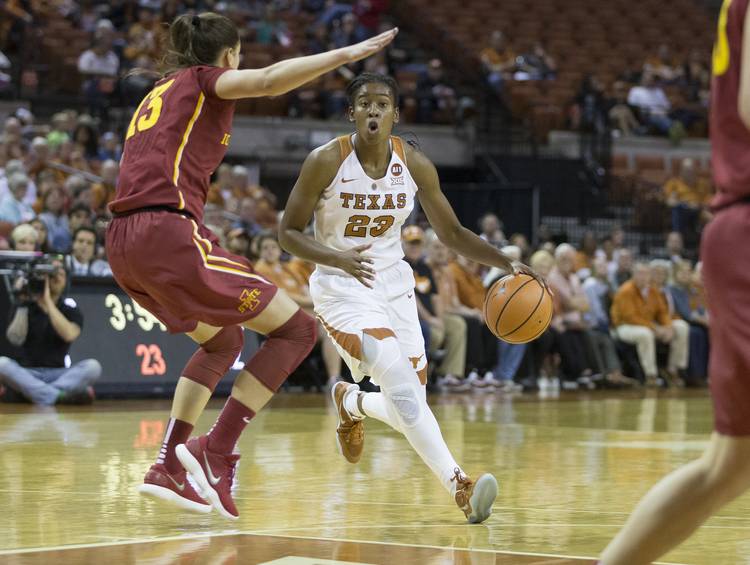 Texas guard Ariel Atkins was the seventh player taken in the first round of the WNBA draft. (Stephen Spillman / for AMERICAN-STATESMAN)

Ariel Atkins is not expected to be a team savior when she reports to the Washington Mystics on April 29.

That’s what Mystics coach and general manager Mike Thibault said after he chose the former University of Texas standout with the seventh pick of the first round in Thursday night’s WNBA draft.

“Our goal was to find a wing player that could be a scorer and a defender,” Thibault said. “She’s got the size (5-11) to get after people. … I think that her basketball I.Q. and energy level is off the charts, and I think that she proved over the course of her time at Texas that she is a very dynamic and efficient player. She’s a good passer and proved her efficiency in college.”

However, Thibault, though, said Atkins will not be a “high-volume” player in her rookie season. The Mystics are already loaded with veterans — led by perennial All-Star Elena Delle Donne — who reached the WNBA semifinals last year. Atkins will spend most of the season learning the system and experiencing a different level of basketball.

As expected, South Carolina forward A’ja Wilson was taken by the Las Vegas with the first pick of the draft. Three players from UConn were selected in the first round — forward Gabby Williams (Chicago Sky, No. 4), forward Azura Stevens (Dallas Wings, No. 6) and guard Kia Nurse (New York Liberty, No. 10).

Texas guard Brooke McCarty, who surprisingly was not drafted, received good news late Thursday when the Los Angeles Sparks invited her to their training camp as a free agent.

McCarty heads to a Sparks team that has qualified for the playoffs in 16 of 20 seasons, more than any other WNBA team. Former Tennessee All-American and WNBA league MVP Candace Parker is among the best players in the league. She And McCarty will have at least one friend on the team — former Longhorns standout Tiffany Jackson-Jones.

Atkins and McCarty will best be known for helping the University of Texas reach the Sweet 16 four straight years.

Atkins, who was projected to be a late first- or early second-round pick, might have been surprised to go No. 7. Thibault said he did not call to warn her she was about to be drafted.

The Mystics were 18-16 last season. They defeated the Dallas Wings and New York Liberty in the first two rounds of the playoffs before they were swept by the Minnesota Lynx in the semifinals.

Thibault said he scouted Atkins and McCarty several times last season during games at the Erwin Center. He noted that he has coached two of UT’s assistant coaches — he was an assistant coach with the U.S. Olympic Team when Tina Thompson earned a gold medal in 2008 and he was the head coach of the WNBA’s Connecticut franchise when Jamie Carey played for the team.

“This is a great fit for Ariel,” Texas coach Karen Aston said. “(Thibault) “is a detail-oriented coach. I do know he likes players who can score in multiple ways, which Ariel can do. … Ariel’s the type of player who wants to learn. Her intention is to not only to go (to Washington) and play well, but to soak up every bit of knowledge that she can from the players and coaches.”

Thibault said he was impressed by Atkins while reading an American-Statesman article about her in late February. In it, Atkins was asked about her plans after graduation.

“To make sure Plan A works.”