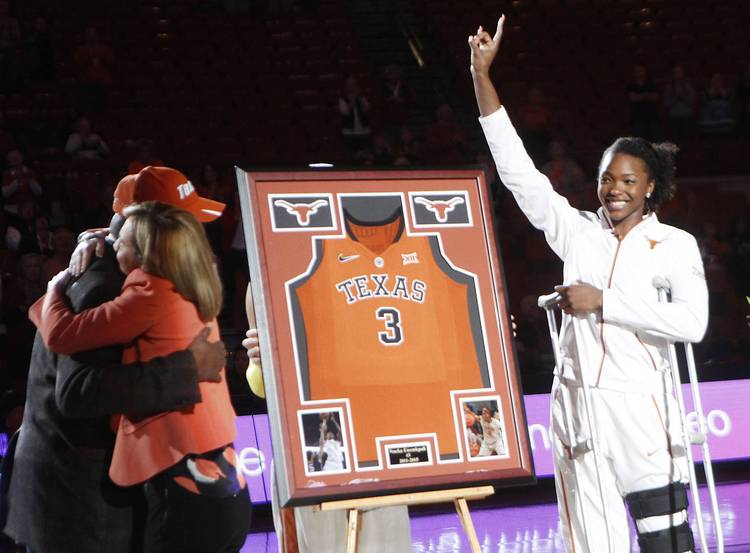 Texas' Nneka Enemkpali(3) salutes the crowd as she is announced on senior night before their game against TCU at the Frank Erwin Center Tuesday, March 3, 2015. (Stephen Spillman for AMERICAN-STATESMAN)

Former University of Texas basketball standout Nneka Enemkpali’s career as a college coach is about to begin.

Enemkpali enters her first college on-court coaching job after spending two seasons as the women’s basketball video coordinator at Gonzaga. There, she was part of two West Coast Conference Championships and two NCAA Tournament appearances, as the Bulldogs posted a 53-13 (.803) record.

“For this hire we spent time evaluating what we would want for this position, and for us, Nneka checked all the boxes and more,” UCSB head coach Bonnie Henrickson said. “She has prepared herself by playing at the highest level and has an eagerness to learn and grow in the profession. Her experience as a post player will be an invaluable addition to our staff, while her ability to communicate and her passion for the game will allow her to relate to our student-athletes.”

Enemkpali finished her Texas career with 1,116 all-time points, which ranks 35th in program history, and 899 rebounds, which ranks 10th all-time at UT. Her Longhorn career was cut short by a senior-season injury. At the time of that injury (Jan. 19, 2015), Enemkpali was leading the Big 12 in rebounds (10.6 per game) and double-doubles (9).

The Pflugerville, Texas, native was named to the All-Big 12 first team following her junior season. She was a Senior CLASS Award Second-Team All-American in 2015, recognizing her excellence in the community, classroom, character and competition.

Enemkpali was a third-round WNBA Draft pick by the Seattle Storm. She later signed a seven-day contract with the Minnesota Lynx.

Enemkpali is a 2015 graduate of the University of Texas with a degree in African-American and African Diaspora Studies.

This week in mock drafts: Chasing history or continuing trends?