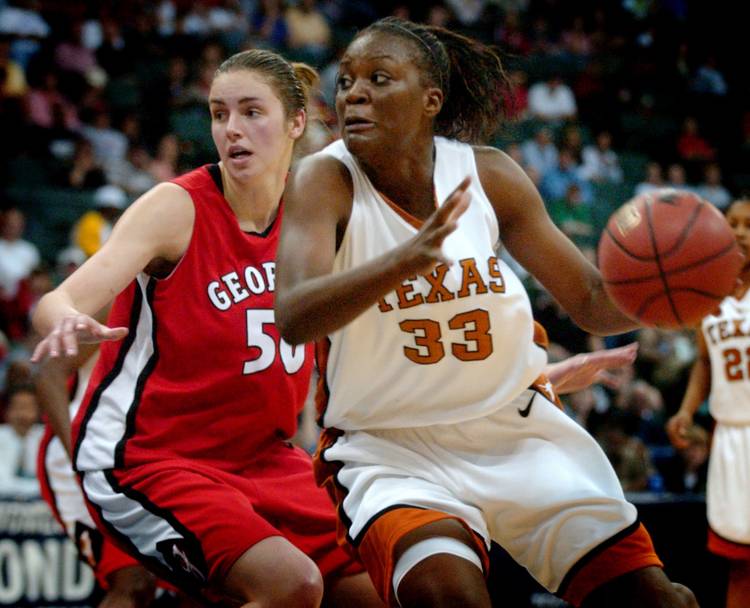 03/21/05 Matt Rourke/AMERICAN-STATESMAN Tiffany Jackson (33, right) was a three-time All-American at UT. Most recently she played for the Los Angeles Sparks of the Washington Sparks.

Tiffany Jackson is coming back to the Erwin Center for another encore.

Jackson, who played for high school state championships while at Duncanville before becoming an All-American at Texas, has been hired by the university to be an assistant on Karen Aston’s staff. She replaces Tina Thompson, who became the head coach at Virginia.

Jackson, a three-time All-American while with the Longhorns, will work with Texas post players. Also Monday, she retired from a long career in the WNBA.

“It means everything to come back here to my alma mater — the place where I grew as a player and as a woman,” Jackson said MOnday. It’s wonderful and there’s no other place I’d rather be. I couldn’t have planned life after basketball any better. This is the perfect situation for me that includes a great group of young women and an exceptional coaching staff.”

Playing for Hall of Fame coach Jody Conradt from 2003-2007, Jackson is the only person in program history to have accomplished the combined feat of 1,000 points, 1,000 rebounds, 300 steals and 150 blocks. Jackson currently ranks fifth in school history with 1,917 career points, fourth with 1,039 career rebounds, third with 313 steals and seventh with 181 blocked shots. She is one of only five players in program history to record more than 1,000 career points and more than 1,000 career rebounds.

“We are so thrilled to be able to bring back a Longhorn Legend who I believe will quickly impact our program in a positive manner,” Aston said. “I have followed Tiffany’s professional career and have marveled at how she has matured and had continued success while facing adversity along the way. She will be a positive role model for our players, and also will be able to share a lot of very important nuggets of advice about life and basketball.”

Jackson, a 6-foot-3 forward, was the fifth overall pick in the 2007 WNBA Draft — the second-highest draft selection in program history — by the New York Liberty and played in 225 career games with 69 starts for the Liberty (2007-10), Tulsa Shock (2010-15) and the Los Angeles Sparks (2017). In her WNBA career, Jackson averaged 6.2 points per game and 4.5 rebounds per game. She also made three career WNBA Playoff appearances.

Jackson earned her bachelor’s degree in applied learning and development from The University of Texas in 2012. She has one son, Marley, born December 12, 2012.

The 2019 NFL mock drafts: Yes, they exist already, yes there is a Texas Longhorn on them

Connor Williams loves Austin and will show it, while Malik Jefferson is using pizza to meet Bengals fans