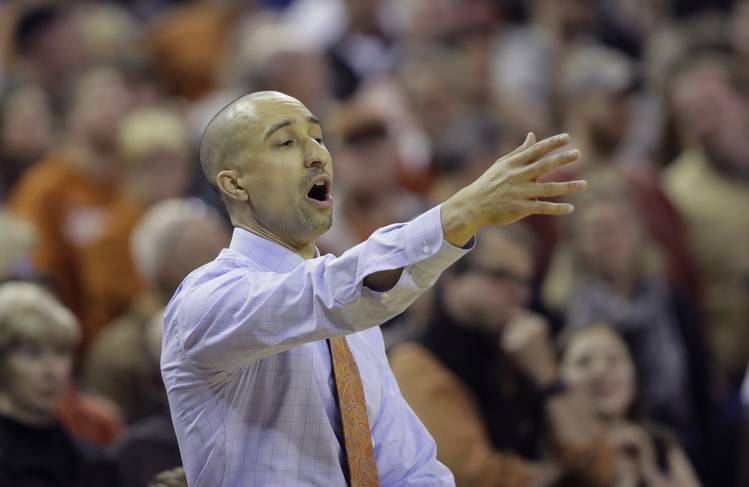 On Shaka Smart’s new signee and how the rest of the team shapes up:

Shaka Smart landed a good one in Courtney Ramey, the 6-foot-3 guard from back-to-back 5A state champion Webster Groves in the St. Louis area. He was Mr. Show Me in the state that always wants proof. Ramey might not be a pure shooter, which Texas desperately needs, but he is a scorer and a playmaker, and he looked good shooting on video. He’s a good buddy of current Longhorn Matt Coleman and wants to play alongside him as dual point guards. Even better, he originally committed to pre-FBI target Louisville and then-coach Rick Pitino, who knows a good guard when he sees one. … Snoop Roach waits to see if he’s invited to the NBA scouting combine before he makes a decision. Andrew Jones is back home in Irving getting treatment for leukemia and doing very limited basketball stuff as everyone roots for his recovery. Coach Fity — as in Smart’s UT record of 50-50 — would love to land Albany grad transfer Joe Cremo (Villanova, Kansas, Creighton) and hope his Horns can make a jump shot or two.

RELATED: Golden: What impact will Garrett Wilson’s post-commitment words have on Texas recruiting?

On Lake Travis WR Garrett Wilson not committing to Texas:

As well as Tom Herman has recruited of late, it’s still a huge setback when dynamic Lake Travis wide receiver Garrett Wilson not only snubbed Texas in favor of Ohio State but left a parting shot when he said too many Longhorns players were undeveloped. Herman’s got seven months to change Wilson’s mind. Best way to do that? Win big this fall. “I’m still giving Texas a 25 percent chance with Wilson,” our recruiting guru Mike Craven says.

Herman’s biggest rival, Oklahoma, could be hurting if quarterback/center fielder Kyler Murray opts to sign a major league baseball contract this summer. He’s hitting .293 with six homers and 32 RBIs, and Sooners head coach Skip Johnson has compared Murray to Andrew McCutchen. Sure, Murray could play baseball this summer as a pro and still play OU football in the fall, but would his major league team want to run that risk of injury?

For the rest of Kirk’s 9 Things, including his takes on the Commission on College Basketball and the NFL draft, click here.