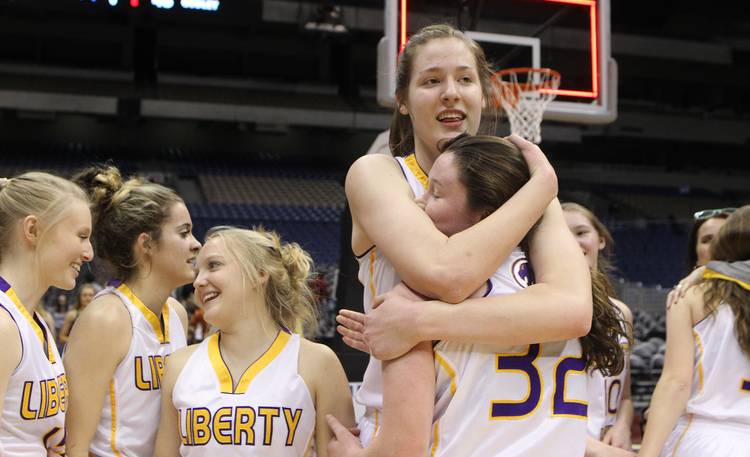 Sedona Prince hugs Liberty Hill teammate Kandyn Faurie as they celebrate a 49-45 win over Godley during the Class 4A girls basketball UIL State Semifinals at the Alamodome in San Antonio, (Stephen Spillman / for American-Statesman)

For Texas freshman Sedona Prince, the comeback to join the basketball team has begun.

The 6-7 post player from Liberty Hill had surgery on Monday in Austin to repair her broken right leg. Surgery was considered “successful,” according to the university.

Prince suffered the injury while playing for the United States in the FIBA Americas Under-18 Championship Friday night in Mexico City. She broke the tibia and fibula in her lower right leg, her mother, Tambra Prince, said.

Prince is expected to make a full recovery, according to UT officials. Prince expects to be ready for the 2019-20 season after sitting out this year with a medical redshirt, her mother said.

“I am so thankful to [USA Basketball Women’s National Team Director] Carol Callan, the USA Basketball staff and our training and administrative staff here at Texas for their diligence in caring for Sedona and transporting her back to Austin,” Texas coach Karen Aston said in a statement. “We are disappointed for her but will focus on her road to recovery with faith that she returns stronger and better than ever.”