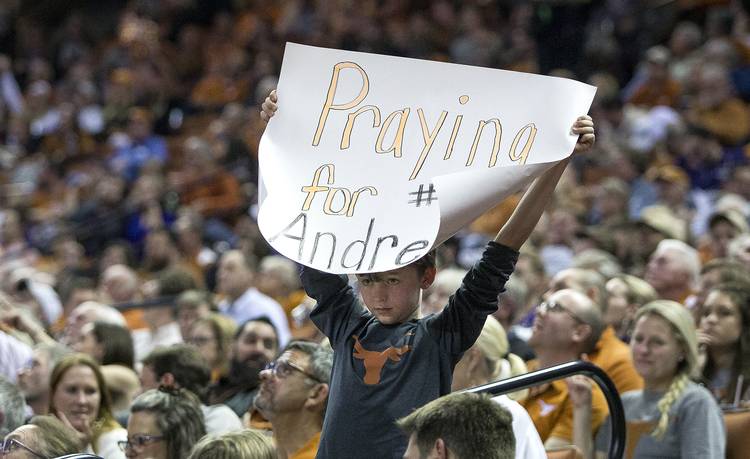 Fletcher Hamilton, 10, holds up a sign reading "Praying for Andrew, #1" during a NCAA college basketball game in Austin, Texas, on Wednesday, Jan. 10, 2018. The school announced that Texas guard Andrew Jones has been diagnosed with leukemia. NICK WAGNER / AMERICAN-STATESMAN

Andrew Jones is winning the battle against leukemia. In fact, he plans on enrolling for the fall semester at Texas, moving back into the dorms and going to class next Wednesday with other UT students.

Jones will be on the men’s basketball roster for the 2018-19 season, a team spokesman said.

“As of today, I’m on schedule to finish up this current round of treatment on Friday in Houston and then head to Austin to move back into the dorm,” Jones said. “I plan to begin classes next Wednesday for the fall semester, and I’m really excited and looking forward to being back on campus at UT with all the other students.

“I’ve still got some treatments down the road,” Jones added, “but I want to let everyone know that I’m feeling better and better every day. I can’t thank everyone enough for their support and prayers.”

Jones’ diagnosis rocked the UT basketball program last January. He suffered a wrist injury in December and simply didn’t feel quite right upon his return. The 6-foot-4 guard suddenly wasn’t able to run basic wind sprints as the energy mysterious drained from his body.

On Jan. 1, Jones tweeted, “Stay focus and let God’s plan for me take its course.”

Ten days later, the university announced that Jones had leukemia, a cancer of the blood.

For several days, it was unclear whether Jones would live. The entire UT family showed its support. Jones even got uplifting messages from Gov. Greg Abbott, and the charismatic athlete was the focal point of ESPN’s “College GameDay” coverage from the Erwin Center.

By February, Jones was back on social media posting videos of him dancing and bouncing back. “But as soon as I started feeling better about myself, I was just in a great place. And I’ve been in a great place lately these last couple of weeks,” Jones said in an interview. “I just wanted to show that I’m not just in the hospital doing bad.”

In June, Texas announced that Jones had re-enrolled in school and signed up for web-based coursework. Jones was still getting outpatient treatment at UT MD Anderson Cancer Center in Houston. By getting back on campus this fall, Jones takes another step toward getting back to normal.