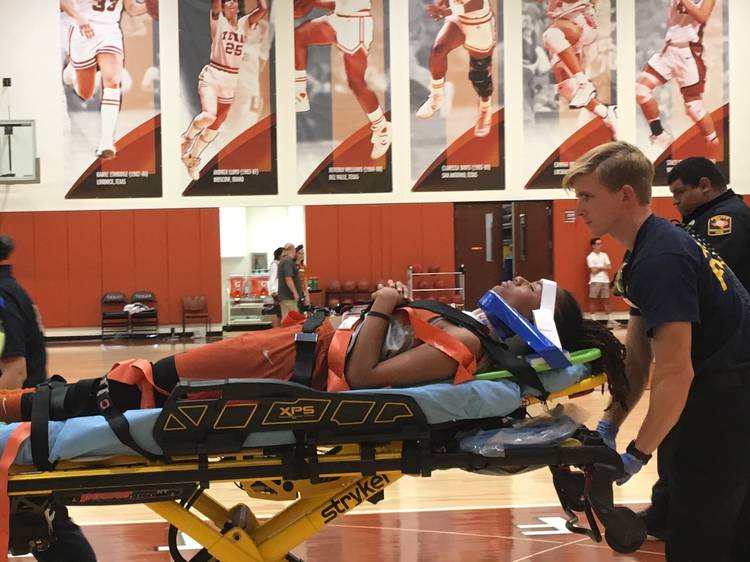 Shae Routt is taken off the Cooley Pavilion basketball court during practice on Sunday after apparently passing out. Photo by Rick Cantu

The first day of practice for the University of Texas women’s basketball team took a somber note when freshman Shae Routt was taken to a hospital after fainting Sunday at Cooley Pavilion, the team confirmed.

Late Sunday, the 6-foot guard was released from St. David’s Hospital near the university, according to sports information director Sean Cartell.

EMS and Austin Fire Department officials were summoned to practice. They tended to the stricken player roughly 30 minutes before she was taken to the hospital.

Routt fainted during the first 10 minutes of practice during basic running drills.

Routt, the most valuable player from the Akins High team last season, was a 2018 McDonald’s All-American Game nominee.

Routt was the 14th-ranked wing player in the class of 2018, according to ESPN.com. She joins Joanne Allen-Taylor, Charli Collier, Sedona Prince and Audrey Warren as part of the program’s 2018 signing class, which has been rated No. 3 by ESPN.com.

Routt is the daughter of former Texas guard Erica Routt.

“Freshman Texas women’s basketball player Shae Routt fainted during practice on Sunday. She was taken to the hospital for a series of medical tests, all of which came back normal. She was released from the hospital on Sunday evening. Shae will continue to be evaluated by the Texas medical staff to determine when she can return to action.”