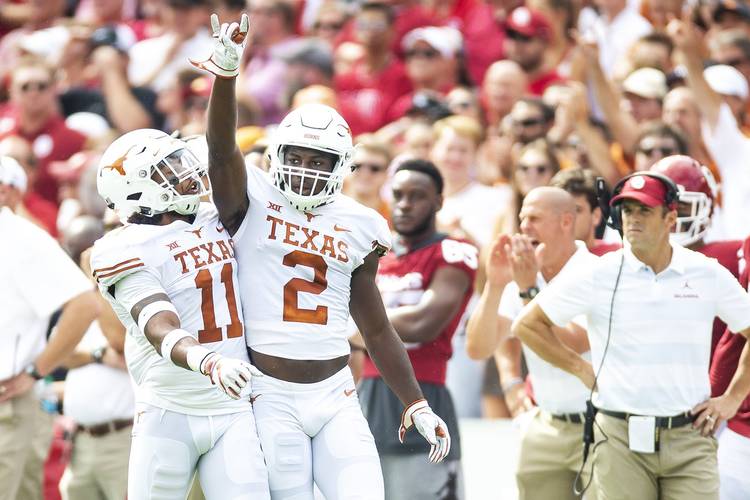 Texas defensive back Kris Boyd (2) celebrates a stop with defensive back P.J. Locke III (11) during an NCAA college football game against Oklahoma at the Cotton Bowl in Dallas, Texas, on Saturday, Oct. 6, 2018. [NICK WAGNER/AMERICAN-STATESMAN]

First, the Longhorns impressed by standing toe to toe with the undefeated Sooners. Then they impressed even more by taking control in the second quarter, establishing a running game, the offensive line beginning to push around Oklahoma’s defensive front, and Sam Ehlinger making plays. The Sooners trailed 24-10 but converted a couple of fourth downs and scored just before halftime.

The pre-game storylines are all playing out for us:

Advertisement
He’s 16 passes away from breaking Major Applewhite’s UT record for consecutive throws without an interception. The last pick Ehlinger has thrown was on the final play of the season opener at Maryland.
Kris Boyd broke up a long touchdown pass at the goal line on the Sooners’ opening drive with a big hit. And he’s had a nice solo tackle on another big hit.
Brandon Jones picked off Murray by playing center field; the interception led to a Texas field goal and 10-7 lead. He later had a nice solo stop on a pass out of the backfield, holding that to a 1-yard gain.
B.J. Foster popped Marcelias Sutton behind the line on a third-and-1 play at Texas’ 14 on the final play of the first quarter. It forced OU to settle for a field goal.
Oddly enough, Caden Sterns has had a quiet first half.
A key play to this game that won’t show up in the boxscore came on third-and-20 for Texas in the second quarter. Ehlinger found Andrew Beck for 19 yards down to Oklahoma’s 31. Texas went for it — the Sooners entered this game 0 for 6 in trying to stop opposing teams on fourth-and-short this season — and got it on a short pass to Tre Watson out of the backfield, and then scored on an Ehinger-to-Watson pass from 28 yards out on the very next play.
The 28-yard touchdown pass will get the headline, but it was that 19-yard pass to Beck that made it happen.

Texas is 10-1 in the Tom Herman era when leading at halftime. The Longhorns will get the ball to start the second half.