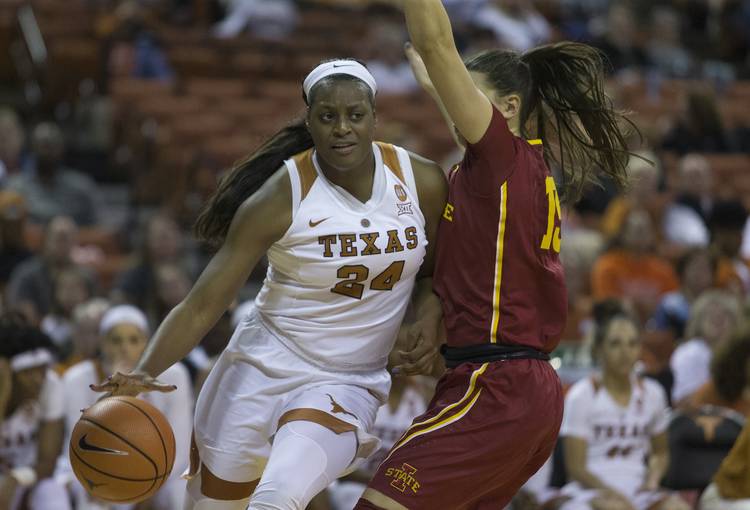 Texas forward Joyner Holmes will be sidelined indefinitely while she recovers from ankle surgery. (Stephen Spillman / for AMERICAN-STATESMAN)

When it comes to women’s basketball rosters, Texas finds itself with the short end of the stick.

That’s not the way the Longhorns built their lineup. But with absence of 6-3 forward Joyner Holmes and 6-7 Sedona Prince, Texas will open the season Nov. 8 against Duquesne short-handed.

“This team will have to find its identity more than once this season,” coach Karen Aston said Monday.

Prince broke her right leg while playing for the United States U18 team at the FIBA Americas championships in August in Mexico City. The freshman from Liberty Hill has made such impressive strides, there is a chance she will still play this season.

Aston said Prince’s recovery has been “somewhat miraculous” and that her progress has been “encouraging.”

“She hasn’t been written off this year,” Aston said. “That’s a decision that is ongoing. I’m not getting ahead of myself.”

Holmes had ankle surgery on Thursday after getting hurt in practice last Monday. Although there is “no timetable” for her return, she will return to the lineup this season.

Fans are encouraged to get their first glimpse of the men’s and women’s basketball teams at the Texas Tip-Off at 6:30 p.m. Wednesday. After introductions, players from both teams will participate in drills. That will include a slam-dunk contest for the men.