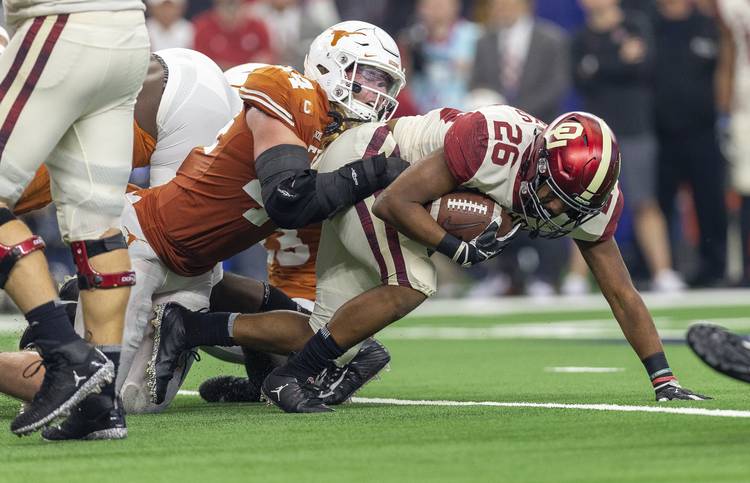 It’s halftime at AT&T Stadium in Arlington. Fifth-ranked Oklahoma, needing a win to — in all likelihood — earn a spot in the College Football Playoff, is leading No. 14 Texas, 20-14.

As expected, this is looking like it’s going to be a close one. Shootout? Maybe, but if so, it’ll have to emerge in the second half. Texas’ defense, save for a couple of ill-advised penalties, is keeping the Longhorns in this game by containing Kyler Murray’s ability to improvise and slowing down the Sooners’ running game. Sam Ehlinger is playing steadier than he did in Lawrence last week, and Collin Johnson is having an impressive afternoon.

Texas has led all game — until the final minute of the half, when Murray engineered a quick-strike scoring drive for the halftime lead.

Back on Oct. 6, it was a 24-17 Longhorns lead at the half. Texas exploded for three third-quarter touchdowns and took a 45-24 cushion into the fourth. We obviously remember Oklahoma’s three-touchdown rally to tie it up, setting the stage for Cameron Dicker’s game winner.

Boyd did, however, turn in a good play on the first snap of the second quarter. He broke up a touchdown pass to Marquise Brown on a third-down fade route; Brown actually made the grab, but Boyd then knocked it out of his hands.

Johnson added a 31-yard gain in the second quarter. And added an important 23-yarder on fourth-and-4 — Tom Herman’s first gamble of the day — down to OU’s 15. He’s got four catches for 96 yards.

Oklahoma, which won the toss but deferred, will get the ball to start the second half.