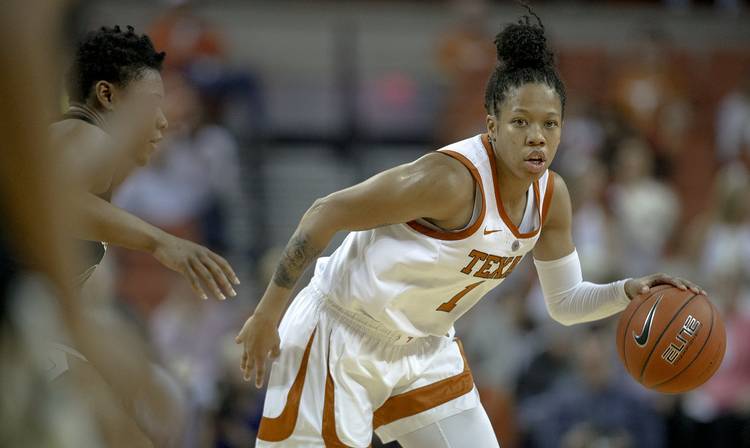 Texas guard Sug Sutton (1) and the Longhorns let a 14-point lead evaporate in the second half. [NICK WAGNER/AMERICAN-STATESMAN]

Kayla Goth scored 13 of her 15 points in the second half to help Kansas State rally for a 69-60 victory over Texas in a Big 12 women’s basketball game Sunday night at the Erwin Center.

Destiny Littleton scored 16 points for Texas but had only one point after halftime. Danni Williams had 14 points for Texas, including four buckets behind the 3-point line.

Kansas State trailed by as many as nine points in the first half but rallied to take a 27-26 lead at the break. Goth was 1-for-6 in the half, but her layup with 12 seconds remaining gave the Wildcats the lead at halftime.

Texas would erupt with a 16-1 run at the beginning of the third quarter to take a 42-28 lead. But the Wildcats fought back and trailed by only 46-45 entering the fourth.

Peyton Williams scored 13 points to help fuel K-State’s comeback. The Wildcats were hot behind the 3-point line, hitting 12-19 behind the arc. They were 8 of 11 in the second half.

This marked the second time the Wildcats have beaten the Longhorns this season. They earned an 87-69 victory over UT last month in Manhattan.

After a solid season-opening showing on the road, Texas remains attached to its No. 23 ranking