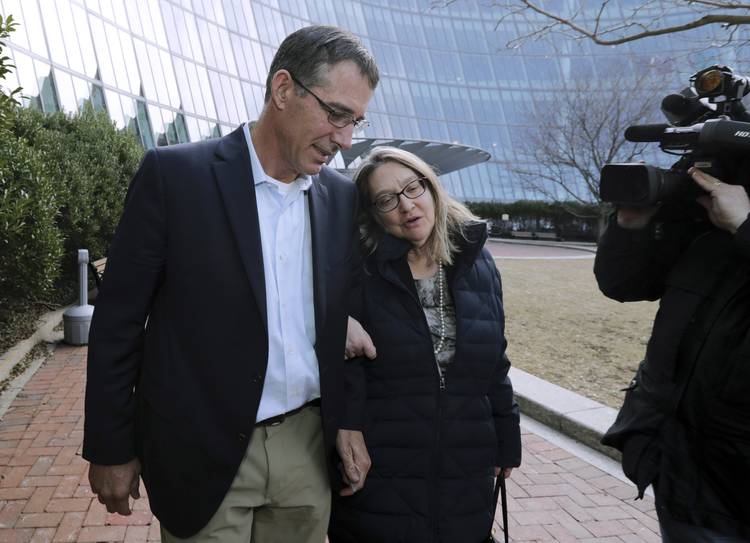 Former University of Texas men’s tennis coach Michael Center has agreed to plead guilty in connection with the nationwide college admissions scandal and will admit to accepting $100,000 for helping the son of a California venture capitalist get into the university under false pretenses in 2015, according to the U.S. Department of Justice.

The plea agreement was announced Monday as federal prosecutors in Massachusetts said 13 parents charged in an investigation dubbed Operation Varsity Blues also plan to plead guilty to using bribery and other forms of fraud to help their children get into selective colleges and universities.

Center, 54, who will plead guilty to one count of conspiracy to commit mail fraud and honest services mail fraud, could not be reached for comment. He faces a maximum sentence of 20 years in prison, but will probably receive a lighter punishment in part because he accepted responsibility and did not force a trial. A plea hearing has not been scheduled.

Center’s decision to plead guilty is a departure from the strategy his first lawyer, Dan Cogdell, declared last month when he told news reporters the coach would not plead guilty and predicted an acquittal at trial. Seven days later, Center hired a new lawyer, John Cunha Jr., who declined to comment Monday when reached at his Boston law firm.

The agreement comes about a month after federal agents surprised Center at his home in Northwest Austin before he left for work March 12 and took him into custody. Court documents released that day showed Center was caught on an FBI wiretap admitting to accepting $60,000 from Rick Singer, a disgraced college admissions adviser who persuaded the coach to give a scholarship to a California student by passing him off as a competitive tennis player. Like most schools, UT has lower academic standards for scholarship athletes than for nonathletes.

Center was introduced to Singer by Martin Fox, a Houston youth tennis coach who also has been charged in the case but has pleaded not guilty.

Center received an additional $40,000, split into two payments, that prosecutors say went to the UT tennis program. Center was placed on administrative leave within hours of his arrest and was fired the next day on the eve of a match against top-ranked Ohio State that the Longhorns won in Austin. In Center’s 18 full seasons at UT, his team never failed to qualify for the NCAA postseason and made three trips to tennis’ version of the Final Four.

The student whom Center helped get into UT is the son of Silicon Valley venture capitalist Christopher Schaepe, who last month told the American-Statesman through a spokeswoman that he believed three donations he made to Singer’s Key Worldwide Foundation — a total of $631,564 — were aboveboard. Schaepe, who has not been charged in the case, said he was under the impression the money would go toward children’s causes and was stunned to learn about the allegations against Singer. He was ousted from the venture capital firm he founded last month after he informed his partners that Singer had helped his son get into UT.

Prosecutors say Schaepe’s son signed a small scholarship with Center’s team, enough to cover the cost of books, before rescinding it shortly after arriving on campus in 2015. Schaepe’s spokeswoman said the student thought he was signing up to be a manager for the team, not to play. The student pivoted to a manager position for Shaka Smart’s men’s basketball team.

The case is the largest college admissions prosecution ever mounted by the Justice Department, and it has exposed how far some wealthy parents will go to get their children admitted to selective schools.

The parents who agreed to plead guilty Monday included actress Felicity Huffman, who paid Singer at least $15,000 to boost her daughter’s SAT score, according to prosecutors. The “Desperate Housewives” star apologized in a statement, saying, “My daughter knew absolutely nothing about my actions, and in my misguided and profoundly wrong way, I have betrayed her.”

Another actress, Lori Loughlin, and her husband, fashion designer Mossimo Giannulli, are charged with paying $500,000 in bribes to get their two daughters into the University of Southern California as crew recruits, even though neither participated in the sport. They were not among those who agreed to plead guilty.

Center and the other defendants who agreed to plead guilty have also agreed to cooperate with the Internal Revenue Service and pay back money from improper tax deductions on the bribe payments.

Meanwhile, federal education officials have opened preliminary investigations into admissions practices at eight universities tied to the bribery scandal, including UT. The U.S. Department of Education is looking into whether the schools violated any laws or rules, including those governing federal student financial aid programs. UT is cooperating and also conducting its own review. Gov. Greg Abbott has called on all public schools in Texas to review their admissions practices.

“We continue to cooperate with federal law enforcement,” a UT spokesman said Monday. “Our highest priority is to complete our internal review to determine whether UT has the necessary rules and procedures in place to prevent someone from committing violations in the future.”

This week in NFL Mock Drafts: Which Longhorns are appearing among the prognosticators’ picks?