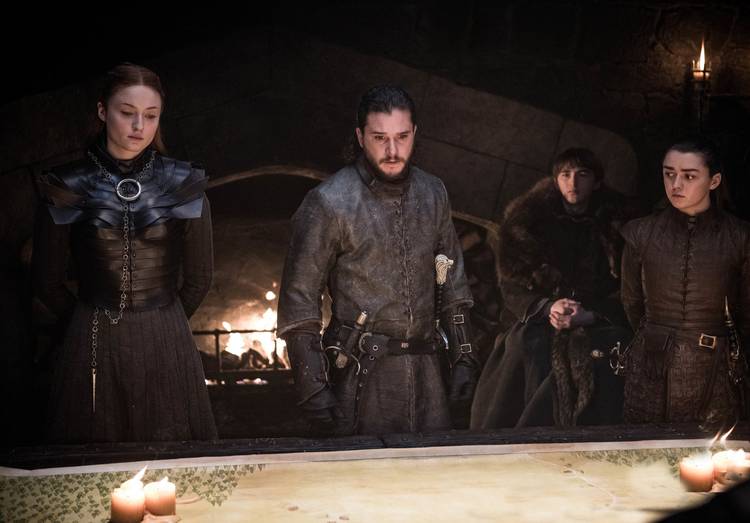 This image released by HBO shows from left, Sophie Turner, Kit Harington, Isaac Hempstead Wright, and Maisie Williams in a scene from "Game of Thrones," that aired Sunday, April 21, 2019. (Helen Sloan/HBO via AP)

Right now, the hottest recruit in college football may be a fictional one.

Game of Thrones, the hit television show, is wrapping up its final season. Among those watching this past Sunday’s much-discussed episode was someone from Texas’ social media department. On Monday, the official Instagram account of UT’s football team posted a photoshopped picture of Arya Stark participating in the Eyes of Texas after a football game.

This is not the first time that Texas has tied itself to Game of Thrones. This got us thinking, though, about what position Arya Stark would play if she was a Longhorn.

For context, we asked American-Statesman reporter Phil Jankowski to describe Arya Stark. Jankowski reports on City Hall for the American-Statesman. He is also the co-host of our Game of Thrones podcast. Jankowski describes Stark as “a pint-sized murder ninja. She is the soul of the show and a fan favorite for sure. She posterized the Night King this episode, killing the heart of a malevolent evil force. She won the war essentially.”

So would Arya Stark make a good quarterback? Texas, of course, already has a QB1 and fan favorite in Sam Ehlinger. But questions exist behind Ehlinger on the depth chart. It wouldn’t hurt to back up the soul of UT’s offense with the soul of another franchise.

Yes, Texas has a kicker that’s taken down what its fans think is a “malevolent evil force.” But would Arya the Assassin be a better nickname than Dicker the Kicker?

The hard-hitting safeties at Texas have recorded their share of kills over the past few years (think Brandon Jones on West Virginia QB Will Grier, DeShon Elliott on Notre Dame WR Torii  Hunter Jr., and P.J. Locke III on Tulsa RB Corey Taylor II). Maybe Arya Stark would be the model student at DBU.

Maisie Williams, the actress who plays Arya Stark, is listed as 5-1. Former Texas running back Tre Watson wasn’t quite as short, but Texas does need to replace the 5-11 producer of 786 rushing yards. UT’s new-look offensive line won’t need to open many huge holes if it had a running back that can squeeze into the small ones.