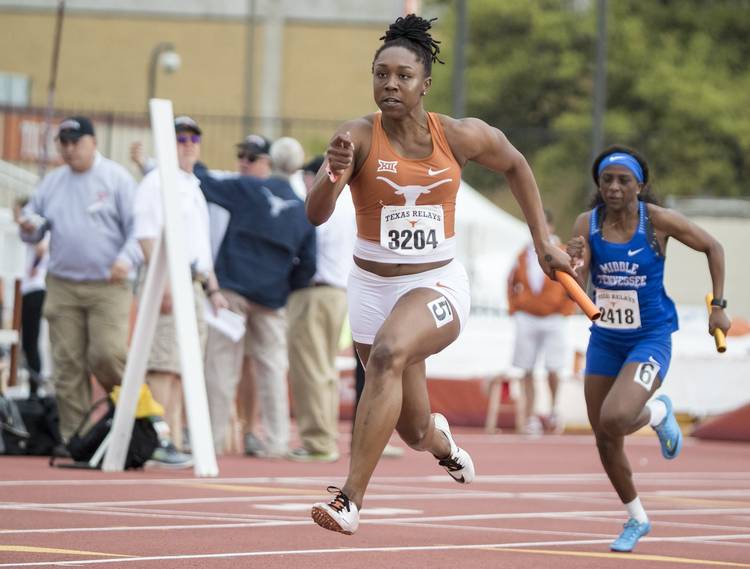 Texas senior Teahna Daniels runs in the 400-meter relay at the Texas Relays at Myers Stadium in Austin on March 29, 2019 [RICARDO B. BRAZZIELL/AMERICAN-STATESMAN]

For the fourth time in six years, the Texas women are the unquestioned queens of the Big 12’s track and field scene.

Texas was the first to cross the finish line at the Big 12’s outdoor track and field meet on Sunday. This weekend’s triumph in Oklahoma comes nearly three months after UT won the Big 12’s indoor title. Texas also swept the conference’s crowns in 2014, 2015 and 2016.

On Sunday, Texas received wins from senior Teahna Daniels in the 100 and 200-meter dashes. Texas teammates Julien Alfred and Kynnedy Flannel finished just behind Daniels in the 100-meter dash, and the freshmen swapped places in the 200-meter finale. The Longhorns also recorded first-place wins in the 400 and 1,600-meter relays. Those victories coupled with previous wins by senior Ashtin Zamzow in the javelin and heptathlon led UT to the top of the podium.

In addition to her two individual wins, Daniels also ran the second leg on UT’s 400-meter relay team. With 22.5 points, Daniels was named the high-point scorer for the women at the meet.

The Texas men finished in third place in their competition at the Big 12 meet. With 120.5 points, Texas fell behind Texas Tech (164 points) and Iowa State (126 points).

Next up for Texas is an NCAA preliminary competition in Sacramento, Calif., from May 23-25. The Longhorns will then host the NCAA Championship in early June.

With one week left in the regular season, what is Texas’ path to the postseason?