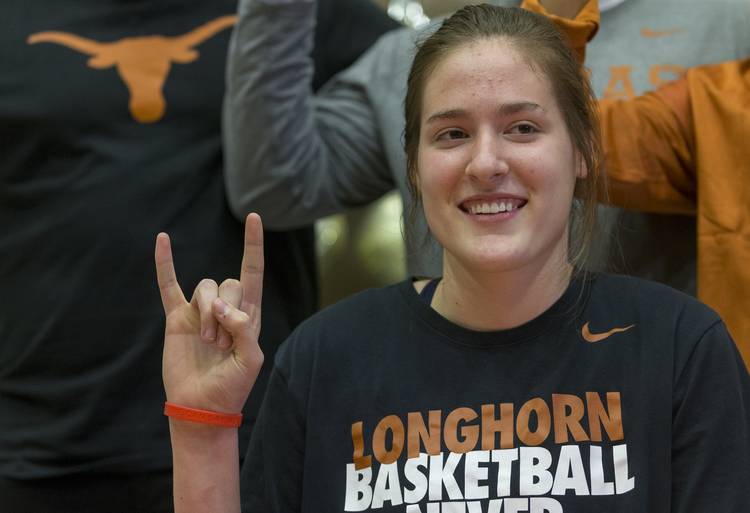 Sedona Prince, now playing at Oregon, holds up her horns during a signing day event at Liberty Hill in 2017. Prince signed a letter of intent with the University of Texas and will be the second tallest player in UT women's basketball history. (Stephen Spillman / for American-Statesman)

Former University of Texas basketball player Sedona Prince said she left the team because she felt “unsafe” with the medical staff at UT after having multiple surgeries for a broken leg suffered in August 2018, according to a recent interview. Prince’s comments were first reported by The Oregonian.

Prince, who transferred to the University of Oregon in July, still hopes to be granted an NCAA waiver to play immediately for the Ducks. Coach Kelly Graves, though, told The Oregonian the 6-7 post from Liberty Hill is still hobbled and might not be ready to play until the Pac-12 season begins in January.

During an interview on the “Pour Your Heart Out” podcast posted on Wednesday, Prince said her broken leg suffered during the U18 FIBA Americas Championship in Mexico City did not heal properly and a second surgery was performed this spring in New York.

Here is a portion of Prince’s comments from the podcast:

“I was up and not walking for probably nine or 10 weeks after (the second surgery). Then the recovery process started from there again. It was going very well until it got to the point of where I felt very unsafe … at Texas. I felt that they did not have my best interest in mind. I was going to appointments alone or just me and my mom. No trainers there, no student trainers, no one, no doctors, just the doctor that I was meeting with, the doctor that took my X-rays.

Prince was a McDonald’s All-American while at Liberty Hill. She was expected to have a big role in the Texas frontcourt with 6-5 sophomore Charli Collier and 6-3 senior Joyner Holmes.

A Texas spokesman said university officials would not comment on the report. The Longhorns open the regular season against South Florida Friday night in Tampa

When reached by phone on Thursday, Prince’s mother, Tambra Prince, declined comment. She plans to attend Oregon’s first game of the season, an exhibition Saturday against the USA national team.

Tambra Prince said the interview on the podcast happened “long ago.”