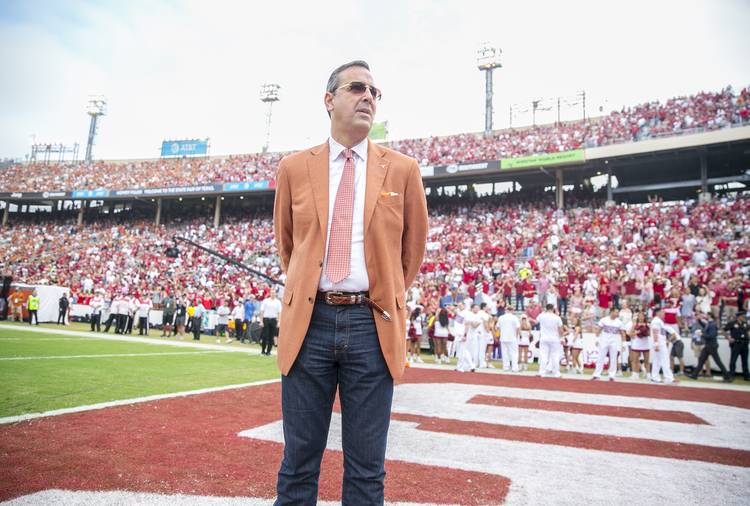 This week, college administrators and industry leaders gathered in New York for the Learfield IMG Intercollegiate Athletics Form. Conference officials discussed items such as student image and likeness and mental health of their athletes. Also discussed were the future of television and streaming rights.

On Thursday, one of the sessions for conference attendees was a one-on-one interview with Texas athletic director Chris Del Conte, conducted by ESPN’s Holly Rowe.

Del Conte covered a wide-range of topics including the state of Texas athletics and the new basketball arena.

Here are some of the highlights per a press release from the Sports Business Journal:

On Texas president Greg Fenves and the new Moody Center:

“He asked me, ‘I want to build an arena, but I don’t want to pay for it.’ My man has been living in Colorado way too long, smoking the herb, you know what I mean? Build a $400 million arena and we’re not going to pay a dime? So, we put an RFP out (won by Oak View Group). We will own the building. OVG will manage it. Live Nation will populate it with events. So, whatever my man was smoking, it was magic dust, because we got a new arena.”

On steering Texas out of turbulent times:

“Everyone at Texas expects us to win a national championship. There’s a sign in the weight room: ‘The pride and winning tradition of the University of Texas shall not be entrusted to the weak or the timid.’ It is what it is. Every time we go out and compete, that other team wants to beat you so they can say, ‘We beat Texas.’ ”

“If you pass out in the upper deck, good luck. Police ain’t showing up. We had no way to get to you. Our stadium, I mean, it’s a big old battleship. So we have to address it.”

Texas AD Chris Del Conte had the crowd and ESPN's Holly Rowe laughing when he shared his views on technology and social media. Del Conte: "I would kill it today on the dating scene." Rowe: "Did we just invent Texas Tinder?" #sbjiaf pic.twitter.com/fLGwqCR9my