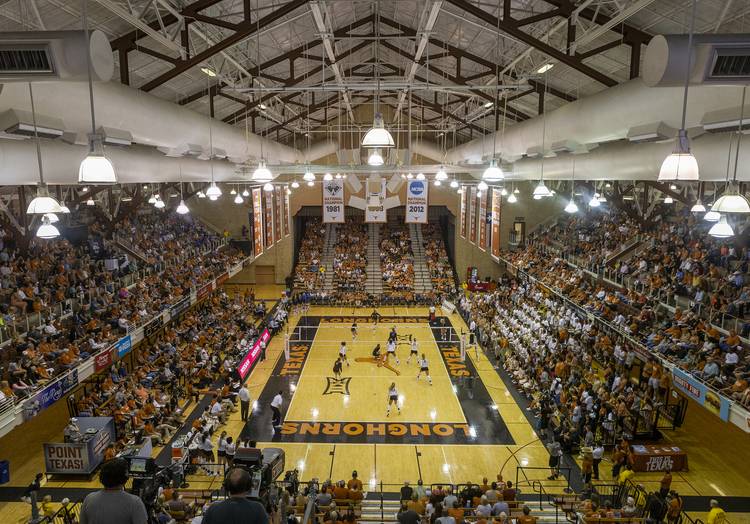 Pushed to the brink a week ago, Minnesota retraced its steps in holding off Florida in five sets Friday in the NCAA volleyball Sweet 16 at Gregory Gym.

The Golden Gophers (26-5) will face Louisville (22-9) in Saturday’s 7 p.m. regional final, with the winner advancing to the Final Four next weekend in Pittsburgh. Louisville defeated host Texas in five sets in the first semifinal.

Last week, Minnesota also rallied from a 2-1 deficit to topple Creighton in five sets in the second round of the tournament. That experience of almost losing it all to surviving and advancing remained with the Gophers against a talented and persistent Florida squad, which finished 27-5.

“What happened last weekend, sure. There’s probably some benefit going through a tough matchup in the tournament,” Minnesota coach Hugh McCutcheon said. “It took everything we had to find a way to win. We maintained our composure when things weren’t going our way.”

Florida coach Mary Wise recalled when the teams met in the fourth match of the season in September and Minnesota won 3-0 in a dominating performance.

After the Minnesota loss, Florida ran off nine straight wins and won 10 of 11. Overcoming injuries to key players such as sophomore outside hitter Thayer Hall (who suited up and recorded 17 kills against Minnesota), the Gators closed out the season winning six in a row before losing to Minnesota for the second time.

“We thought it was a great opportunity to see how far we’ve come; could we have narrowed the gap from the last time we played them, and the answer is obviously we had,” said Wise, who was an NCAA runner-up in 2017. “I can guarantee anybody who saw the (first) Florida-Minnesota match in person would not have expected the score today.

“We only lost to three opponents (Minnesota, Stanford and Kentucky), and we only lose five matches, and three of them were in five sets.”

Minnesota senior outside hitter Alexis Hart led the Gophers with 16 kills. Junior right side hitter Stephanie Samedy, a Florida native, recorded 17 digs for Minnesota and tallied the final point of the match.

“I thought Florida played a really good match,” McCutcheon said. “They had a good plan, and it took everything we had to find a way to win.”