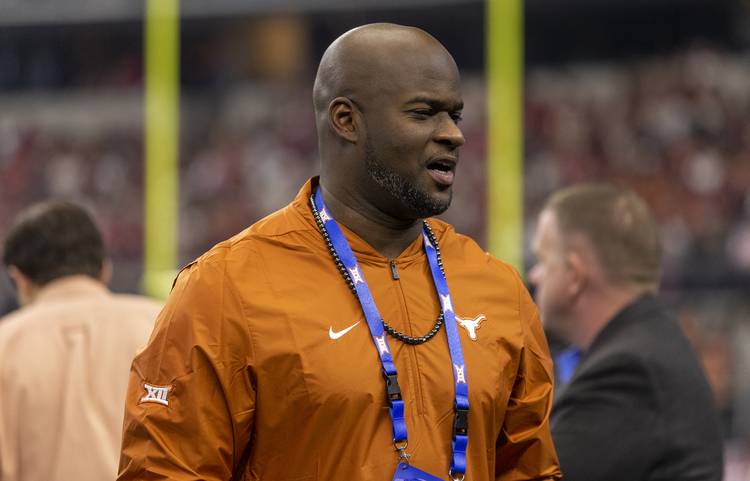 Advertisement
Several trophies and other sports memorabilia belonging to former University of Texas star Vince Young are now on eBay. An anonymous seller says they bought the contents of two storage units that previously belonged to Young at a semi-blind auction in Houston.
“We’ve acquired 2 storage units formally [sic] belonging to the award winning, record breaking, newly inducted into the college football hall of fame, Football Star Vince Young,” the seller says in a post selling Young’s 2006 Rose Bowl trophy for offensive MVP. The “buy it now” price: $50,000.
Young could not be immediately reached for comment.
The seller’s eBay page also has listed as for sale Young’s Manning Award ($50,000); 2005 Maxwell Award for college player of the year ($50,000) and his Madden 08 Xbox 360 NFL award ($12,000). (UPDATE, 8 p.m.: The items have been removed from the seller’s eBay page)
“We will be listing rare one of a kind items from these storage units throughout the next couple months,” the seller says in the post. “You are welcome to pick up locally in Austin Texas.”
The seller also posted for sale the helmet Young wore during Texas’ 41-38 win over the University of Southern California in the 2006 Rose Bowl. “This auction is for his game worn helmet from the 2006 rose bowl game one of the greatest games in college history,” says the seller, who offers to let you skip the auction and buy it outright for $100,000. “The helmet still contains confetti stuck on the inside from the monumental win!”
Young was inducted into the College Football Hall of Fame earlier this month, the 20th UT player to earn the honor.
He played in the NFL for six years after getting drafted by the Tennessee Titans third overall and winning rookie of the year honors in 2006.

.@VinceYoung10 honored today by Mayor @SylvesterTurner and Houston City Council for his induction into the College Football Hall of Fame. Today is Vince Young Day in Houston. Vince celebrating the moment with his family at City Hall. pic.twitter.com/lENQIqRu3z

Advertisement
Young was recognized in Houston Tuesday by Mayor Sylvester Turner and the Houston City Council, which pronounced it Vince Young Day.
Despite the accolades, Young has been hit by some stinging set-backs.
Earlier this year, UT fired the former star quarterback from his part-time job for poor work performance and “failing to maintain standards of conduct suitable and acceptable to the university.” Young, who was making $50,000 annually as the Neighborhood Longhorns development officer and a football camp specialist, was arrested for driving while intoxicated in January 2016 and sentenced to 18 months probation. He was arrested again in February of this year around 4:30 a.m. just outside Houston for allegedly driving under the influence.