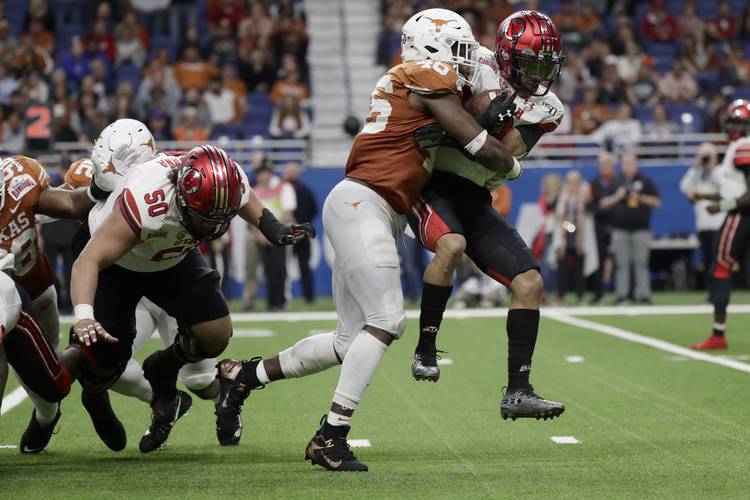 On Wednesday, the Associated Press released its annual “All-Bowl” team honoring the players who have excelled in college football’s postseason. Texas offensive lineman Sam Cosmi and linebacker Joseph Ossai, who was named defensive player of the game, were feted because of their Alamo Bowl performances. The complete team unveiled by the AP:

Joe Burrow, LSU (Peach): The Heisman Trophy winner tied a bowl record by throwing seven touchdown passes in the top-ranked Tigers’ 63-28 victory over No. 4 Oklahoma — all in the first half Burrow went 29 of 39 for 394 yards passing. He also had a touchdown run.

Lamical Perine, Florida (Orange): Perine ran for 138 yards and caught five passes for 43 yards in the ninth-ranked Gators’ 36-28 victory over No. 24 Virginia. Perine had two touchdown runs and one touchdown catch.

Xazavian Valladay, Wyoming (Arizona): Valladay rushed for 204 yards and one touchdown on 26 carries as Wyoming beat Georgia State 38-17. He also caught three passes for 91 yards, including a 63-yard score.

Jerry Jeudy, Alabama (Citrus): Jeudy caught an 85-yard touchdown pass on No. 9 Alabama’s first play from scrimmage and finished with six receptions for 204 yards in a 35-16 victory over No. 17 Michigan.

Tyler Johnson, Minnesota (Outback): Johnson had 12 receptions for 202 yards and two touchdowns as No. 16 Minnesota defeated No. 9 Auburn 31-24.

Sam Cosmi, Texas (Alamo): Cosmi anchored a line that helped Texas rush for 231 yards against a 12th-ranked Utah team that had been leading the nation in run defense. Utah also ranked third in total defense, but Texas gained 438 total yards in its 38-10 victory.

Charlie Heck, North Carolina (Military): North Carolina’s left tackle led a line that allowed no sacks against Temple, which had 39 during the regular season. North Carolina gained 534 yards in a 55-13 blowout.

James Hudson, Cincinnati (Birmingham): The Michigan transfer made his Cincinnati debut as a starting left tackle and helped the 23rd-ranked Bearcats gain 343 yards in a 38-6 rout of Boston College.

Malcolm Koonce, Buffalo (Bahamas): Koonce had two of Buffalo’s five sacks in a 31-9 rout of Charlotte. He also forced a fumble and had five tackles.

Jesse Lemonier, Liberty (Cure): Lemonier had eight tackles and recorded two sacks to improve his two-year career sack total to 20 ½. He was named the game’s most valuable player after Liberty’s 23-16 victory over Georgia Southern.

Rashad Smith, Florida Atlantic (Boca Raton): Smith scored on a 34-yard fumble return and also had a 22-yard interception return as well as 11 tackles in FAU’s 52-28 triumph over SMU.

Khoury Bethley, Hawaii (Hawaii): Bethley made 10 solo tackles – one for loss – and picked off two passes in a 38-34 victory over BYU. His second interception clinched the game with 25 seconds left.

Brady Breeze, Oregon (Rose): Breeze scored on a 31-yard fumble return and also forced a fumble to set up No. 7 Oregon’s go-ahead touchdown in a 28-27 victory over No. 11 Wisconsin. He had 11 tackles and a pass breakup.

Elijah Molden, Washington (Las Vegas): Molden had a 31-yard interception return, forced a fumble and made nine tackles in Washington’s 38-7 victory over No. 18 Boise State.

Riley Patterson, Memphis (Cotton): Patterson made all six of his field-goal attempts, connecting from 37, 41, 42, 44, 48 and 51 yards away. His accuracy gave him a slight edge over Western Kentucky’s Cory Munson, who made a game-winning 52-yarder on the final play of the First Responder Bowl but missed a 29-yard attempt earlier in the game.

Michael Turk, Arizona State (Sun): Turk averaged 45.8 yards on his eight punts and had four of them downed inside the 20-yard line in the Sun Devils’ 20-14 victory over Florida State. He landed three straight punts inside Florida State’s 10 in the third quarter.