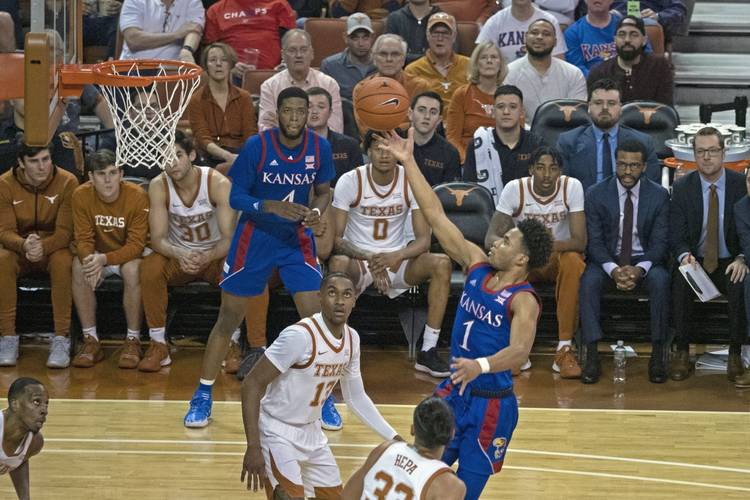 Kansas guard Devon Dotson (1) goes up for a shot against Texas during the first half of an NCAA college basketball game, Saturday, Jan 18, 2020, in Austin, Texas. Kansas won 66-57. (AP Photo/Michael Thomas)

Texas at No. 3 Kansas

About the series: Kansas leads the all-time series 34-9. The Jayhawks won the first matchup this season in Austin 66-57 despite hitting only two 3-pointers. The Longhorns have won only once in Lawrence, a victory that came during the 2010-11 season.

About the Longhorns: It’s rare to hear players openly campaign for their teammates to get more minutes. That’s what Ramey did for freshmen Donovan Williams after Saturday’s win over Iowa State. “He played 23 minutes,” Ramey said, “and I think he should’ve played more.” Williams’ confidence is infectious. He enjoyed his best game of the season, scoring 13 points, getting four rebounds and one assist. “It’s a real thing at the college level,” Smart said. “Freshmen, they have a ignorance-is-bliss to them. There’s so many things they don’t know, but it can really work in their favor.” Last season, Texas lost by two in Lawrence on a botched final play that they were kicking themselves over for weeks.

About the Jayhawks: Dotson’s hip injury was a question mark when Kansas came to Austin last month. But he appears back to full strength now. The sensational scorer had 21 points Saturday as Kansas held off Texas Tech at home. The Jayhawks shot 51.7% from the floor, their highest total in Big 12 play this season. That came against one of the better defensive units in the country. Keep an eye on G Isaiah Moss, who is 9-for-17 (52.9%) in his last two games. In previous years, Texas has battled slow starts in Lawrence. Tech did the same thing, falling behind 16-2. ESPN’s “Big Monday” has long been a showcase for Self’s program. Kansas is 51-12 when playing the 8 p.m. Monday TV slot and a staggering 29-0 record at home.