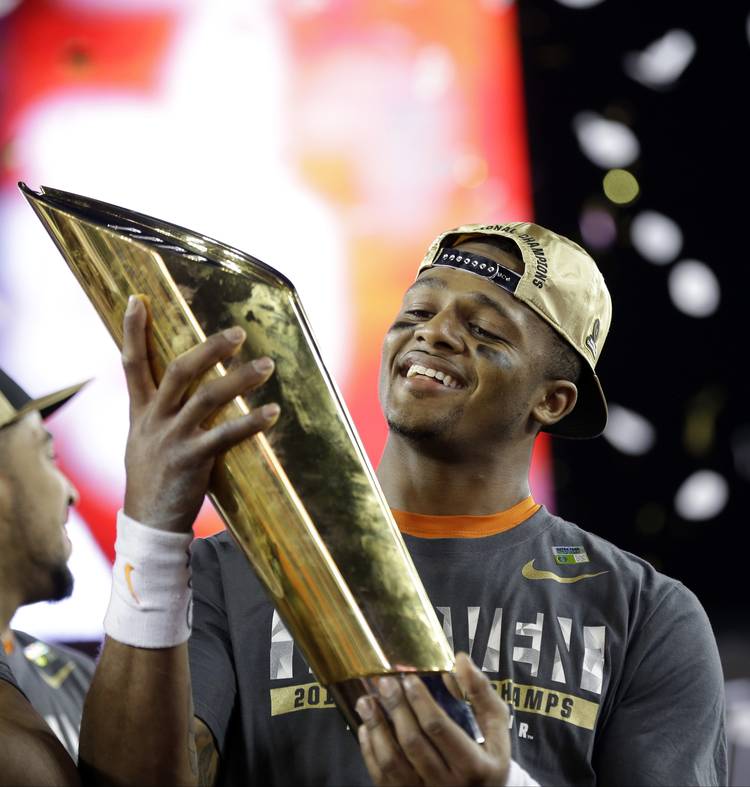 In Clemson’s post-game celebration after the national championship game in Tampa late Monday, quarterback Deshaun Watson said he was thinking of Vince Young when he threw the game-winning touchdown pass with one second left.

Watson and the Tigers became the first team to beat Nick Saban’s Alabama team in a national title game, rallying repeatedly to win 35-31 in one of the great finales in college football history.

A lot like Jan. 4, 2006, when Young’s late-game heroics lifted Texas to spectacular 41-38 victory over USC in the national championship game at the Rose Bowl.

In the aftermath late Monday, ESPN’s Rece Davis asked Watson if he could drawn up a scenario better than throwing the winning TD pass with “a single tick left.”

“Not really, man. But the thing that was running through my mind was Vince Young,” Watson said.

“I was just like, ‘man, we have to be great, and I want to be legendary. Vince Young was one of my greatest players that I love to watch, and we pulled it off.”

Davis concluded, “Vince Young led his team to a national championship in a bit of an upset, and now Deshaun Watson has done exactly the same thing.”

Watson completed 36 of 56 passes for 420 yards with three touchdowns and no interceptions. He also ran for 43 yards against what had been billed as one of the greatest defenses in college football history.

Young had a slightly better statistical game — rushing for 200 yards and three touchdowns and completing 30 of 40 passes for 267 yards — against a lesser defense.

Definitely two of the all-time performances in a championship setting.

Golden: Longhorns can improve, finish middle of the pack in Big 12