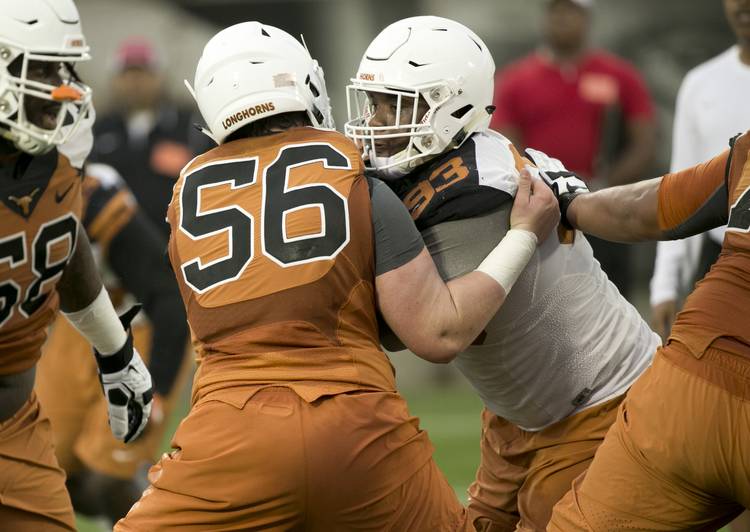 If healthy, Texas’ run game should be the strength of this year’s team. Yet right now, three weeks before the opener, it is in tatters.

Center Zach Shackelford, who was basically handed a starting job when he enrolled early as a true freshman, is the latest Longhorn to go down after hurting his ankle and sitting out Saturday’s closed scrimmage. Joining Shackelford on the sideline were big running backs D’Onta Foreman (ankle, wrist) and Chris Warren (ankle).

Longhorns coach Charlie Strong called Shackelford’s status “day-to-day,” but otherwise had few details to share because the injury had not been fully evaluated.

“Don’t know yet how long he’s gonna be out,” Strong said. “We’re still in the evaluation process with the trainers and doctors.”

Frankly, this is a setback Texas will have a difficult time absorbing because there is little depth at center behind Shackelford, the presumptive starter since spring ball. For now, former defensive lineman Jake McMillon is getting work with the first team, but if McMillon falters Strong indicated right guard Patrick Vahe could slide over to center. Another option is freshman Denzel Okafor, who played center at Lewisville High.

Though the injuries are concerning, Strong said he expects all three of the hurt players to be available for the Sept. 4 opener against Notre Dame. But only, “if I don’t beat them up anymore in practice.”

It sounds like Strong is most optimistic about the health of Foreman, who he said sat out the scrimmage for precautionary reasons.

Strong did not have much of an update on wide receiver Lorenzo Joe, who injured his hamstring earlier this week and now is on crutches.

“With that hamstring injury, you never know how quickly you’ll get them back,” Strong said.