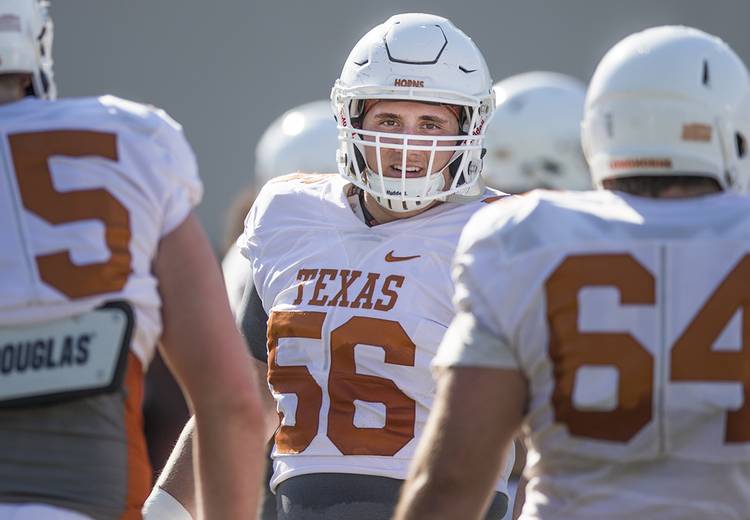 Shackelford was the lowest-rated member of Texas’ 2016 recruiting class. The Belton product wasn’t even ranked as a national athlete, checking in as the No. 52–rated guard in the cycle and the 132nd–ranked prospect in the state, per 247Sports’ composite. Fellow offensive linemen Patrick Hudson, Jean Delance, JP Urquidez and Tope Imade all signed in the 2016 class and were rated higher than Shackelford.

Shackelford played for Bob Shipley, now a member of the Texas staff, at Belton. He was a four-year starter for the Tigers. Shackelford was a 12-6A all-district selection and a two-time all-state selection. He began his athletic career as a youth swimmer and his dad, Lyle, played college football for Central Florida.

Who Shackelford has been here — so far

Shackelford certainly wasn’t expected to be the most impactful offensive lineman of the 2016 class, but that’s exactly what happened when he forced his way onto the field as a center his freshman season. He started up nine games and finished the year as a FWAA freshman All-American and honorable mention All-Big 12 selection.

It’s typically tough for offensive linemen to adjust to the college game because of the strength and athleticism of defensive linemen. Shackelford started in his first college game, snapping to fellow freshman Shane Buechele in an overtime victory over Notre Dame. He missed the second half of the Iowa State game with an ankle injury and did not play against TCU or Kansas.

As a sophomore, he struggled with injury and inconsistency, starting just eight of the 10 games he played in during 2017. It was a largely forgettable and frustrating season for the expected starter at center. He showed great promise early in his career and the junior season is when most linemen turn the corner.

Shackelford was a rare bird. He enrolled early in January 2016 and was on the field as the starter against Notre Dame in the season opener. He’s now logged 17 starts in 19 games. He’s every bit as important as Dominic Espinosa was earlier this decade, a durable player and one that coaches relied on.

As the center, it’s Shackelford’s job to help recognize defenses and start making the line calls. Good thing he’s a three-time member of the Big 12 Commissioner’s Honor Roll. The Horns have an extremely sharp leader up front directing traffic. He just needs to stay healthy.